Here are the pictures you asked for, from the Sweethearts dance. I know, I know, Thursdays are supposed to be all about gratitude–so, what? You’re not profoundly grateful for me sharing? And in such a timely manner? I know I am–grateful, that is, that my daughter has such good friends, and that at least one of their parents thought to take pictures, and was willing to share:

(And can I just point out, that clearly we have taught her well, when it comes to a girl keeping her date in line?)

And I don’t know if you can see it, but,  yes, her nails match match the infamous shoes:

They had a complete rainbow of dresses in this group–you’d think they’d planned it that way:

Her date is the one who seems to have tangled with a slinky at dinner: 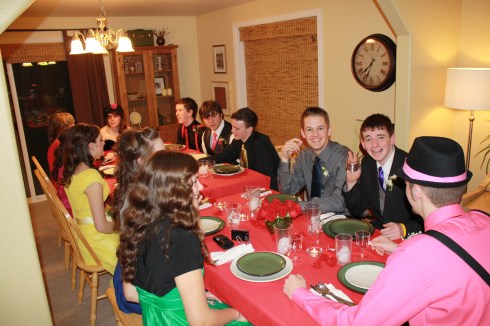 He’s Italian, and asked her to Sweethearts with a long Italian missive which she had to translate online in order to understand. At which point she realized it was mostly blustering bravado about how much superior he was/is at almost everything they might have ever attempted to do. Sweet, teenage boy stuff like that.  If I remember right, she was going to answer with a letter written in a dozen or so other languages. Not sure that ever materialized, but if you know Michael, you’ll agree that it was a excellent idea.

I suppose I should include a picture of them on even footing, just in case she never goes out with someone taller than her again. (Kidding. I’m sure there are lots of men taller than six feet in her future. But just in case.):

This entry was posted on Thursday, April 7th, 2011 at 8:21 pm and posted in Thankful Thursdays. You can follow any responses to this entry through the RSS 2.0 feed.
« You Know It’s True
The Indian In Our Cupboard »