Once upon a time,  I talked the Mr. into sitting for an honest-to-goodness family portrait: 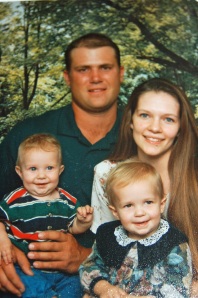 Mother, father, all progeny, all looking in vaguely the same direction without malice in a single countenance. Yeah. I know: it’s amazing. And this was in the pre-photoshop era.

Since then, various relatives have tried to sneak up on us unawares at times in an attempt to recreate such a feat–but mostly they have failed. Or taken the sort of pictures you tuck away in a drawer and hope nobody finds until after you are all safely dead.

This week, I collaborated with a real photographer to ambush my family on their way to church. (You see? I may be getting old, but I’m still wily enough to orchestrate such subterfuge.)

Unfortunately the photographer flaked out on me at the last moment and I was left with six extremely clean children and a freshly shaven other. I snuck into an unoccupied room, covered the receiver with a cupped palm, and called my sister-in-law–probably the only one who would dare approach her brother openly with a camera in hand–and we stuck with the plan.

Eighty four pictures on my camera later, your curiosity must be satisfied with the following:

First, I include this photo as an illustration of our various and respective heights. Keep in mind that I am wearing three inch heels, and my daughter is in ballet flats:

I include the next because, well, it may be the best picture we took, stray feline notwithstanding: 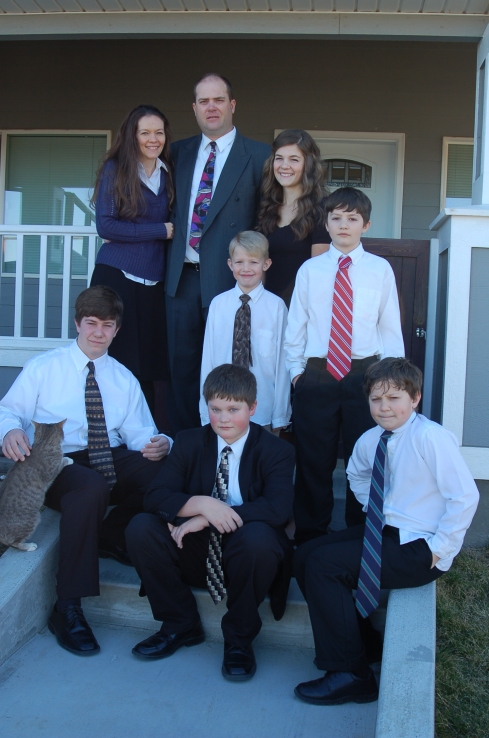 And this one, just to verify that a ten year old (is it the tie, or the sub-zero temperatures of the cement on which he sat?) can maintain that expression for 82 pictures without failing, once: 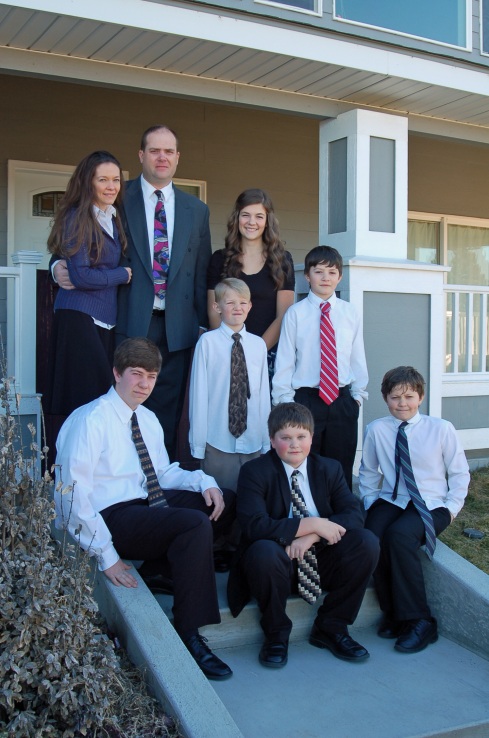 And no, it didn’t occur to me–until just now–even after combing through these pictures for two days, that my youngest two didn’t have their shirts tucked in. Nope. See, that’s where a real photographer might have come in handy–she probably would have noticed such things.

This entry was posted on Wednesday, February 23rd, 2011 at 8:38 pm and posted in Uncategorized. You can follow any responses to this entry through the RSS 2.0 feed.
« A Brother, A Dremmel, a Blowdryer and Exhibit A
Additional Proofs »