My grandfather had this song he used to sing. When he came in from the barn or back from town he’d frequently meet Grandma with this refrain: “Hey, Good Lookin’, Whatchya got cookin’?”  Frequently he dropped the tune and just swaggered in all bowlegged with the question itself–for his wife, his daughters, and his granddaughters–it became somewhat of a standard greeting from him.

One day early in June of 1980, our home out on the Kimball farm burned to its foundations. Grandpa arrived after the house was long gone and Grandma was standing in the yard with the neighbors, sort of shell-shocked, watching it burn. He came up behind her, put his arms around her, and began to sing in her ear, “Hey, Good Lookin’, Whatchya got cookin’?”

That is so my grandfather. He could watch his every possession go up in smoke and come away with a smile on his lips and a song in his heart. No wonder she loved him. Still does; always will; and so do we. 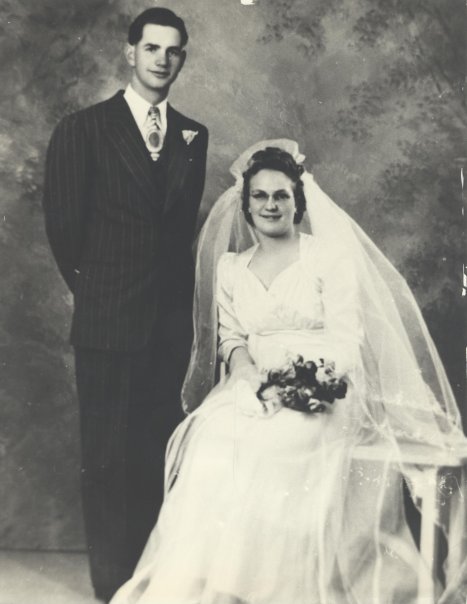 That’s Garth and Jean Forsyth on their wedding day. That dress survived the fire thirty one years ago. I believe it was in a bureau the neighbors dragged out the front door; the well was dry and the house was doomed, and so they rescued what they could.

Of all the people in all the world who know how to both work hard, and still “take it easy”, my grandparents are the pros. They raised 11 children and took care of a large farm and never ran themselves into debt to do it. Grandma knew how to sit on the front patio and watch the world breathe after chores were done, and Grandpa never wasted a moment I ever witnessed on sadness or regret.

He was a wiry little cowboy and she was a nanny and a cook for the ranch hands when they met. They built a life together that surpasses all they ever expected those early years, I’m certain. Of just great-grandchildren alone there are 97–all of them born in the last sixteen years or so, and more on the way. I am responsible for numbers 3, 6, 11, 20, 30, and 43.

Early on the morning of September 27, 1999, when #20 arrived, my grandparents were on their way back to Canada after my sister’s wedding here in Moses Lake. I saw Grandpa’s hat  first, as he swept it off his head, and then his lopsided grin and one raised eyebrow as he entered the delivery room. “Hey, Good Lookin’, Whatchya got cookin’?” he asked.

My grandparents never made it to my graduation or my wedding, or any of the births of my other children–and I didn’t expect them to–we live far from home and I never have been good at planning anyone else’s schedule  into my life, but it was a precious moment to have them there that morning.  And somewhere in the back of my mind, in the center of my heart, there is a voice that asks me continually, no matter where I am, or what I’m doing, if what I have on simmering on my back burner and on my plate would make Grandpa proud of what I’ve “got cookin'”. Because you know he’s going to ask, and I want him to look upon my efforts with as much joy as he did that early September morning eleven and a half years ago: 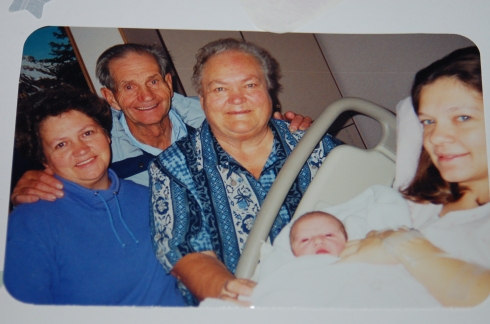 This entry was posted on Tuesday, January 25th, 2011 at 2:42 am and posted in Take it Easy Tuesdays. You can follow any responses to this entry through the RSS 2.0 feed.
« Toddler Wisdom
Collared by Steinbeck »

4 responses to “Whatchya Got Cookin’?”