Do not call my son Potatoes.

He will probably hate you and me, both, for it.

I’m the only one who can call him Potatoes, and then only if nobody else is around to hear me. I heard that he has become newly embarrassed by this.

Call him Quinton. He’s the fifth child of the fifth child, born on the longest day of the year. (Literally–it wasn’t all in my head–it was the summer solstice. Thus his middle name, DeSoleil.)

He was born smiling, dimples and all, and hasn’t stopped:

That’s him at eleven days, in Aunt Lori’s arms. He was the happiest kid. If it’s true that small things amuse small minds then that kid should have a mind the size of a peanut. Kidding! He’s super smart. He’s in the fourth grade this year in an awesome classroom where the walls are absolutely plastered with words; I love it:

Mrs. Larissa Hansen moved up with her class from third grade last year, and he’s got some of his favorite cousins in class with him, which makes for a fun day (poor woman!)

Quinton is my word-coinage king. He loves words, loves to make up words, loves to utter words for the pure auditory/physical sensation of uttering them. Not only that, but he has a mellow little voice, so I don’t even mind listening to him!

Which brings us back to his nick name: Potatoes.

Marty has always coined bizarre nicknames for the children. Quinton, at some point, became Quintomenedos–try saying it with an Argentinian accent, and you’ll be pretty close. No idea where that come from, but it stuck. Quinton instantly pronounced it, “Quintonpotatoes.” And you can guess what happened from there.

Especially since he had a history of being obsessed with certain tuberous vegetables:

Every morning he would open the door under the kitchen sink and retrieve two potatoes, one for each hand. He would carry them around all day. I think he equated them with balls.  Look at those ankles and wrists, will you? Not only was that kid happy, he was fat and happy.

He’s thinned out some, but we still like to joke that Quinton can smell sugar, even if it’s in a shrink wrapped package in another building. He loves to eat the way he loves to talk, but he also likes to move. (Dance, specifically, and let me tell you, he has some moves.) He can also do forty-five sit ups in one session. Egad. My stomach hurts just thinking about it.

Another bizarre coincidence with these two fifth children–Marty was born when his father was thirty years old and he was thirty the day Quinton was born.

This is Potatoes, today: 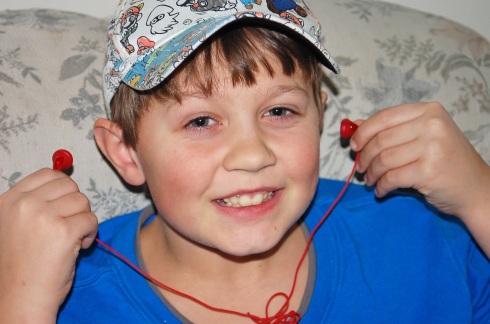 The hat, he colored himself, FYI. He’s also an artsy type.

And he would like to be called Toney now, not Potatoes.  Pardon me, “Toney DML…” and yes, you pronounce the dot-dot-dot. As in “Toney Dee Em Ell Dot Dot Dot”.

Just in case you were wondering.

This entry was posted on Saturday, January 8th, 2011 at 7:45 pm and posted in Saturday Spotlight. You can follow any responses to this entry through the RSS 2.0 feed.
« Flashback Friday
Lessons from a Salt Lick »