Youth of The Noble Birthright

Earlier this week, a teen we know asked if she could throw my daughter a surprise sixteenth birthday party.

You realize I’ve been deathly ill, that I work twelve to sixteen hours a day, and I’m going to school more than double full time.

I said “Sure! That would be so awesome! She won’t let me throw her one! What day?”

That’s cool. I can con somebody into cleaning up the living room, right? They don’t need to see the rest of the messy house. I mention to my kids that some classmates are coming over Thursday night. (I didn’t say whose classmates.) And offer monetary rewards for a little housecleaning help. They roll their eyes and shudder. Mom’s having friends over? Ewww.

Teen friend calls back Wednesday to let me in on what they are planning. About the only thing I catch is that they want to do a whole house scavenger hunt. After that, I pretty much went into whole body shock. I think my husband could sense this. I can’t think of another explanation for his sudden ability to maneuver a vacuum cleaner and dust counter tops.

My sister-in-law says she’ll make caramel corn. My father-in-law volunteers his homemade rootbeer. My sister-in-law of the amazing cake skills thinks she can whip out a cake. Not to mention edible markers, so that the teens can all sign it. The teens are bringing toppings for an ice cream bar. All I have to do is make up thirty two clues for the scavenger hunt.

On Wednesday night it occurs to me that I should probably buy the ice cream. NOW. I let my oldest son in on the secret, and he goes with me to pick out snacks. (Which was a really good move–he hit it, dead on.)

On Thursday, I have eleven babies and toddlers show up for twelve hours. Husband cleans the house. Oldest son cleans the bathroom. Daughter does the laundry. (Well, she always does the laundry–something about the teen need for clean aparel, I don’t know. You quit doing it, long enough–they’ll take over.) Husband takes children out to dinner.

I throw out some table cloths and bowl the snacks, and the teens begin arriving.

Sixteen of them. A fortuitous number, for a sixteenth birthday, really.

Daughter comes home, sees the lights and hunkers down in the garage loft with her brothers to wait out Mom’s party.

ANYWAY. Point being: It was amazing. Those kids–eight boys and nine girls, counting my daughter–were the most well-mannered, articulate, intelligent group of people I’ve ever associated with. Unbelievable. They’d come up my stairs in groups of three and four, smiling, laughing, talking, all over the room. There was caramel corn, three kinds of ice cream, hot fudge, nuts, toppings galore, chex mix, potato chips, cake, root beer, candy corn, chocolate everything you can name–and not one kernal or wrapper or drip on my floor. Not one.

Not one argument broke out; not one youth left to themselves. They divided themselves into eight co-operative teams for one game and two teams for another game–which they came up with, organized and directed themselves. I didn’t have to do a thing. I had to point out the ice cream scooper and look for some matches. That’s it. The volume was incredible, but it was a joyful noise–and we’re not talking eleven shrieking toddlers joyful, either. Just healthy, harmonious noise. I’ve never, ever, seen anything like it. After all their game ideas were exhausted, they asked my nine-year-old (who’d come up to see what the ruckus was about earlier, and had been corralled into one of their games) what movie he wanted to watch. And by eleven thirty, they were all gone, of their own accord. My house might have been cleaner when they left than when they came. I kid you not.

If these youth are the future of our nation and our planet, it is in amazing hands: 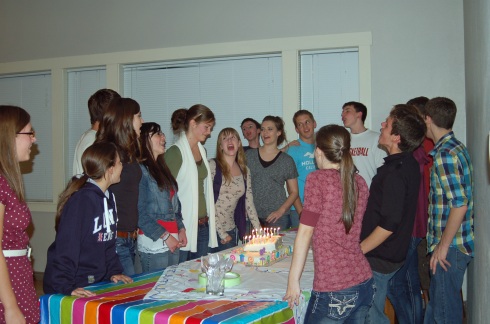 This entry was posted on Friday, October 8th, 2010 at 1:40 pm and posted in Uncategorized. You can follow any responses to this entry through the RSS 2.0 feed.
« Facebook
Not My Dog »

13 responses to “Youth of The Noble Birthright”