By kimberlybbert
Some time ago, I told emjay I would take a walk around my neighborhood and post some pictures of the other Washington.
And since my biggest gripe about an exercise program is the utter yawn factor, I decided to take my camera out yesterday and walk until I found something to smile about–something to share. I wasn't terribly optimistic–after all, we live on

Easy Street NE
and it's not a terribly happening place.
But walk I did. I spared you the shots of sagebrush and tried to focus on blooming things. My favorite–the weeping willows, shot straight up:

Under the willows
There was this house, which always makes me smile, if only because the owners, all aesthetics aside, cannot seem to resist adding on (and on, and on…)

Of course, in a desert, I suppose there's a certain amount of desperation to use your land in any other way except for planting vegetation which will need water.
Then there was this car, which if nothing else, makes my teenagers smile: 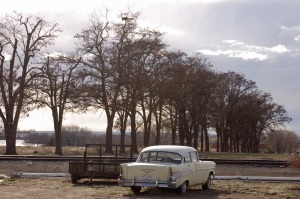 Car
Along those same lines, one of my neighbors missed her home town enough that she actually purchased, from the city of Portland, two of their lampposts.  There are apparently some things you can take with you:

DSC_0406
The things that really made me smile, however, I wasn't brave enough to take a picture of:
The man with two garden shovels and a large cooler into which he was attempting to deposit the, well, deposits of the six little yapping canines who were running around his yard. Thank heaven that man has a fence. And keeps his animals in it.
The elderly neighbor who appeared to be spritzing his daffodils with  . . . Windex . . .???
The man wearing a shower cap and riding a Harley. I'm kidding. It just looked like a shower cap. It was a helmet. Of sorts.
You notice they were all men; I think the women were indoors making dinner. I'd put mine in the oven and set the really loud, obnoxious and unrelenting timer for the children. You can't be Betty Crocker every day, non?
I did end up coming across this small, inventive female, however, and she did make me smile–if only because when I pulled out my camera to capture the unique amusement she had devised for herself, she began peddling away fast and furious and casting dark, suspicious glances over her shoulder. She knows my children, but probably thought I was some kind of predator:

This entry was posted on Friday, March 26th, 2010 at 4:38 pm and posted in Uncategorized. You can follow any responses to this entry through the RSS 2.0 feed.
« Sticker Shock
Ran Across This Quote Today »

10 responses to “The Other Washington”