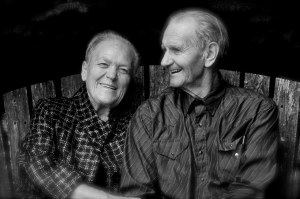 Grandparents Forsyth2
My grandparents call me eight times a year–on my birthday, on my husband's birthday, and each of my children's. They talk to the birthday-ee, of course, but I always exercise my right to monopolize the conversation after everyone else has done hemming and hawing and wandered off.
This week Grandma has been failing. A veritable storm of emails has flooded through the ranks, updating all ten children and literally dozens and dozens of grandchildren and great-grandchildren and in-laws about her condition.
I have sat in my warm little corner and fought unexpected tears as I considered the possibility that this could really be it–and thought, you know, I don't think my children will understand the depth of my sorrow, when these two go.
After all. My grandparents call me. We don't call them. We haven't visited half a dozen times, even.
You know the litany of should-have/could-have cudgels you beat yourself with in hindsight.
There is a book I have been writing for more than five years. A book for Grandma. When I publish it, I have always intended to ship it to her with the largest jar of dill pickles I can find. If I have to walk across the border holding it myself.
My children won't get the joke.
It might be too late.
My oldest boy turned 14 yesterday. Grandpa called. "How's Grandma?" I asked, even before giving the phone to my son.
"I'm doing okay," she pipes up. She's on the phone, too.
I spent the next half an hour listening to Grandma talk. She tells me about her best Christmas ever (age 16, silk stockings, one orange, one apple, two walnuts and some sugar candy: bliss) and riding the train to Lethbridge to pick out a diamond ring, dances in Waterton, and going off summers to cook for 14 cowboys at an age when I didn't let my daughter walk down the street by herself.
Grandma hasn't spoken this clearly or well for years. Grandpa has never been so silent.
I want to tell her about my book. It's almost done. I have to submit the final draft within the week. I want her to know I wrote it for her. Every word. I used her beautiful, unique name, and I set it in the foundations of her home.
But I don't want her to stop talking. I'm scribbling notes furiously into a notebook as she speaks, grasping at the stories and the joy, trying to pin them to paper.
Finally Grandpa breaks in. "Don't you have a birthday boy?" he asks.
I surrender the telephone. I pace as the fourteen year old listens silently to whatever these strange voices on the phone are telling him. Occasionally he says something like, "Five-foot-ten." Or "Uh-huh."
When he's done, he hangs up.
I hold the silent phone and I don't know what to do with it.
I find my daughter. My one and only.
She's fifteen.
We see one another occasionally.
I ask her questions I never thought I'd ask my daughter. We sit up until ten-thirty–me on my bed, her in the chair–and we puzzle and we laugh and we understand one another in a way I didn't think was possible.
And somewhere up north, Grandma is okay. No matter what happens. She's got her little white pill to cut down on the nausea, and she knows that her Redeemer lives. "Especially this time of year," she said. And she said it with so much joy and so much strength that I recognize the fount of my own convictions.
And I open up my own to my daughter.
But I pray to God that I still have time to send the pickles.

This entry was posted on Thursday, December 24th, 2009 at 5:56 pm and posted in Uncategorized. You can follow any responses to this entry through the RSS 2.0 feed.
« And It’s Not Even Noon Yet
A Christmas Dare »

7 responses to “Pickles for Grandma”